Eight Bronze Age boats discovered in a deep Cambridgeshire quarry are much older than it was first thought, carbon-dating research has revealed. 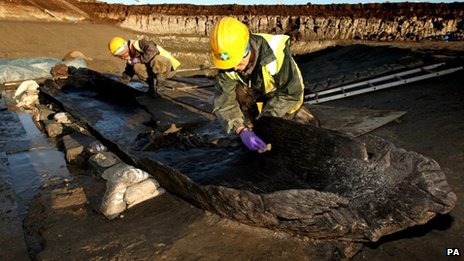 The vessels, found by archaeologists at Must Farm near Peterborough in 2011, have now been dated to about 1500 BC, 200 years older than was first thought.

Samples taken during the conservation process have revealed the boats to be made from oak, lime and field maple.

The vessels are undergoing a two-year preservation programme at Flag Fen.

The wooden craft are being sprayed with a special wax to stop the timbers from degrading, the same technique that was applied to the 16th Century Mary Rose warship.

It is hoped the process will reveal more about the Must Farm log boats, one of which is almost 30ft (9m) long.

Mark Knight, from Cambridge Archaeological Unit, said: "We've been carbon dating the sediment the boats were found in to try and create a detailed chronology of the river channel that once ran from the Midlands to the North Sea.

"This will tell us when each of the boats were disposed of by the people of the time. What we're now working on is carbon dating the actual boats which will give us an idea of when they were constructed. This will then tell us how long they were in use and gives us a much greater depth to the history of the area."

Visitors to Flag Fen will be able to watch conservators at work, with the aim of eventually putting the boats on public display in glass cabinets.

Mr Knight said: "As we lack any texts from the time to tell us what was going on, the boats help us to better understand the levels of craftsmanship and technical sophistication of the time.

"In the future we'll be judged by the technology we leave behind and these boats are a similar marker for the people of the Bronze Age."