A project that began in April 2012 to recreate a Bronze Age sewn-plank boat using Bronze Age tools is about to face its final trial: when the boat is launched from Falmouth Harbour in Cornwall at noon on Wednesday, March 6th, will it actually float? It’s almost 50 feet long and weighs approximately five tons, and it is literally stitched together with yew twigs. Nails hadn’t been invented yet in Britain 4,000 years ago, so there are none to be found on this boat. 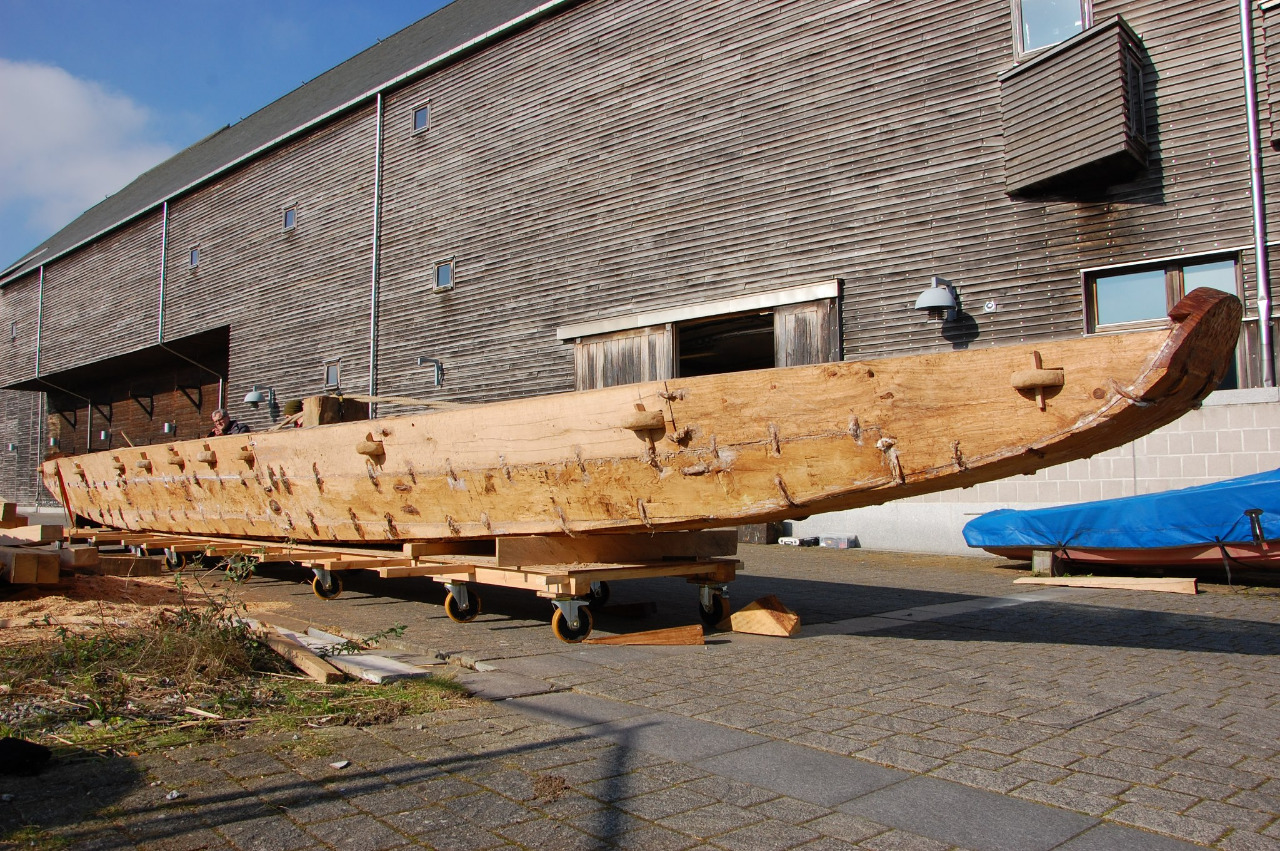 The construction process alone has been a voyage of discovery. A team of 30 volunteers — historians, hobbyists, students — from the University of Exeter, Cornwall and further afield (Norway, Turkey, France) came together under the supervision of professional shipwright Brian Cumby to build the prehistoric boat in a workshop open to public view at the National Maritime Museum Cornwall. Starting with the tools used to make the boat, wooden adzes and hammers made by hand by an expert in Bronze Age woodworking, the aim of this project has been to build a boat the way Bronze Age inhabitants of the British Isles built them. The only concession to modernity and speed were some clamps and the occasional lifting device.

The boat is modeled after the third of the three Bronze Age Boats unearthed at North Ferriby in East Yorkshire. It was discovered in 1963 on the shore of the Humber and was the most complete and oldest of the three. About 50 feet long and shaped like a slice of melon, it was made out of oak planks sewn together with yew withies caulked with moss. There was space for 18 paddlers to sit in pairs on nine thwarts with plenty room left for passengers and as much as 4.5 tons of cargo. Ferriby 3 dates to between 2030 and 1780 B.C. making it one of Europe’s first known sea-going vessels.

These sewn-plank boats are particular to the British isles. They traveled the rivers of and perilous seas between Britain, Ireland and mainland Europe, trading, probably in precious metals to make the risk worthwhile.

The National Maritime Museum Cornwall used two massive green oak logs to create their version of this ancient craft. They adzed it into planks and formed the keel by placing the widest bases of the logs end to end. Once the keel was laid and stitched together using the yew sticks stitches caulked with moss and tallow, they attached ribs to the keel using incredibly complex joints. Side strakes were then installed between the ribs. All seams and holes were caulked with the moss-tallow mixture and then sealed with beeswax.

There is no archaeological evidence that tallow and beeswax were used in the making of these boats, but they were in general use in Bronze Age Britain. Since entire boats with every element surviving intact for 4,000 years have yet to be discovered, the team has had to work with known materials to solve problems as they arise. They didn’t know how the yew twigs were processed, for instanced. They had to experiment with soaking, stripping the bark, split branches to figure out how best to sew the planks together.

The completed boat will be launched next Wednesday from the slipway at the watersports centre in Falmouth. There are tons of gorgeous pictures on the project’s Facebook page and there’s a poll where you can vote for the boat’s name. They will also be announcing on Facebook how the rest of us poor shlubs not lucky enough to be in Cornwall next week can watch the launch over webcam, so keep your eye on the page.

Here’s a stunning time-lapse video of the construction that you must watch because when was the last time you saw people hewing 25-foot oak logs with a wooden adzes? If you answered never, you are correct.