Until recently, Laconia was regarded an exception in the map of the Peloponnese Mycenaean palaces, even though –according to myth– its queen, Helen, was the cause of the Trojan War (the Homeric epics are an important source of information about the topography, the social and political organization and the habits of the Mycenaean era). This raised a lot of questions about the politics and the administrative organization of Laconia during that period. 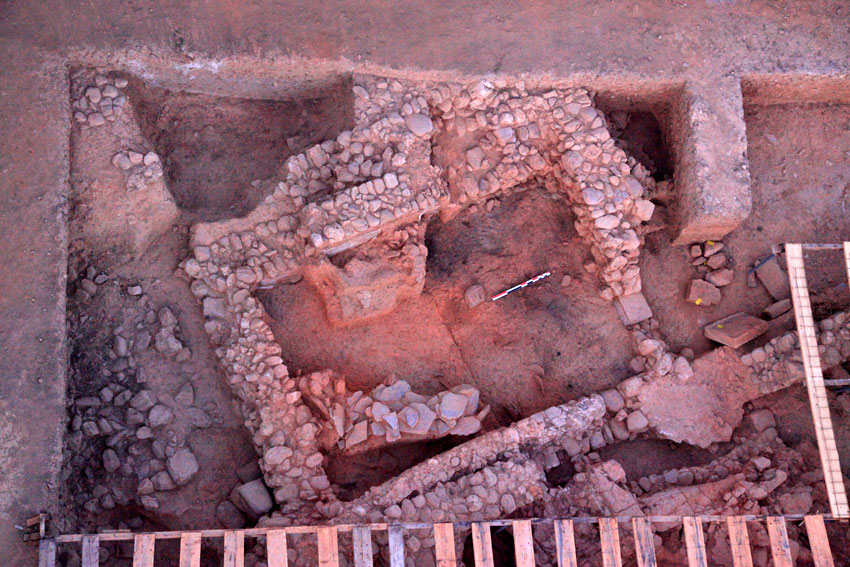 Answers to these questions slowly began to emerge in 2008, when clay tablets with Linear B came to light at the archaeological site of Aghios Vassilios, near Xirokambi. The tablets suggested the possible existence of an archive, a sort of register, within the site, which would provide strong evidence for the fact that there was a palatial-administrative center at the site. The Linear B texts are referring to two important production units: one of perfume substances and the other of fabrics, both operating within the palatial centres and controlled by them. Also found were a big number of artefacts related to weapons, a characteristic type of vessel and an object of symbolic value, the double axe.

The excavation data and the deciphered texts of the tablets –which prove a very pedantic bureaucratic organization and a powerful administrative background– confirm the significance of the settlement in matters of administrative structures in Laconia of the Mycenaean era. This is why the Archaeological Programme of Aghios Vassilios was initiated for the systematic archaeological survey of the site, under the auspices of the Archaeological Society at Athens, led by Mrs. Vasilogamvrou and joined by numerous scientists of various fields.

The systematic survey is being conducted since 2010, on the hill where the Post-Byzantine church of Aghios Vassilios is located. From that spot one can see all other Mycenaean sites of the valley. The Mycenaean settlement covers the narrow hills of the Sparta plain, approximately 11,5 klm south of the city, not far from Xirokambi.

The main building phase of the three Mycenaean buildings which are being excavated dates back to the 14th century BC. During that time construction works in Aghios Vassilios were intensive. Moreover, elements related to the organization and architecture of the buildings during that period point to contact with Crete. One of the buildings investigated is connected with functions of social and religious nature, while in the extensive destruction layer remains of a symposium, figurines, seal stones, clay and bronze vessels and 21 bronze swords were found. The numerous fragments of wall paintings show that the buildings of Aghios Vassilios had painted decoration, as did the rest of the Mycenaean centers of mainland Greece and the Aegean. A fire which broke out at the end of the 14th century BC or the beginning of 13th century BC, destroyed the buildings, which were not rebuilt at the same location.

The discovery of the palatial centre of Aghios Vassilios is very important for the study and understanding of Mycenaean era, not only in Laconia, but in all parts of mainland Greece, as Mrs. Vasilogamvrou and her team point out, after having completed the excavation period for 2013, on the 20th of August, and having enriched Aghios Vassilios’ archive by new fragments of tablets.